Mid row Marksman.
Physical basic attack.
After being angered, he will turn into a ferocious beast.

Morphs into giant beast. and leaps at his prey, dealing physical damage and knocking the target airborne. His beast form increases his armor, magic resist, and max health limit. He will also cause an avalanche that deals huge AoE damage to surrounding enemies.

Throws a fruit pie at the enemy, ricocheting off up to 2 targets before returning to his hand. The pie deals damage to the enemy and steals 40 pts of energy.

Uses collected candies to charm a random target. The charmed target will turn and attack his or her own teammates.

Gets extra energy from basic attacks. 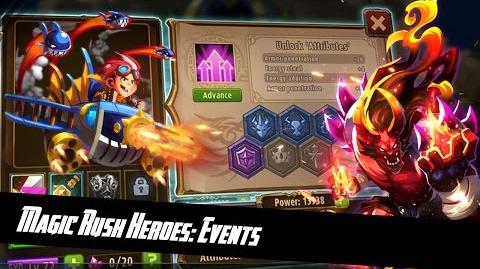 Add a photo to this gallery

Retrieved from "https://magicrush.fandom.com/wiki/Robin?oldid=13600"
Community content is available under CC-BY-SA unless otherwise noted.