Continuously fires a barrage of rockets from his back, randomly bombing enemies, with higher chance of hitting severely injured enemies.

Assembles a machine gun, dealing damage to enemies in a straight line in front of him. If the target's physical attack damage is less than 50% of Dwarf Gunner's, then it will deal heavy damage.

Fires a flying pincer at a target, dealing damage. If the target receives severe injury, then it will deal additional damage.

Deals additional damage to a target that receives heavy damage. 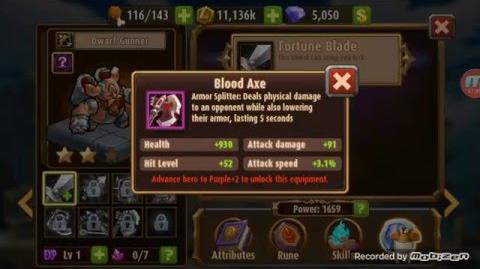 Retrieved from "https://magicrush.fandom.com/wiki/Torin?oldid=15359"
Community content is available under CC-BY-SA unless otherwise noted.